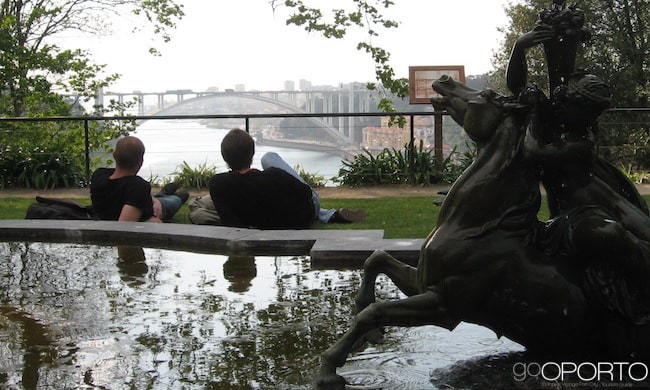 Porto remains a conservative and closeted city, with its very first Pride Week having only taken place for the first time in 2001 and the annual pride march only in 2006. But the march does have the honor of going down the main avenue, Avenida dos Aliados, indicating that the city is slowly opening itself up to gay life.

Unlike Lisbon however, there is no traditionally "gay neighborhood." There are a couple of gay bars, but no gay hotels. The city does have several beaches, but none known to be "gay," so this is definitely not Mykonos.
These are the gay and gay-friendly spots in Porto:

Rua José Falcão, 137
It's a café open to everyone, but it's often a largely gay crowd that you'll find at night. It's in a former warehouse that's been given an attractive retro décor and a chill-out atmosphere, where many of the city's gay nights start.

Rua da Conceição, 35
Open throughout the week except on Mondays, this retro-styled bar is divided into two rooms, where an LGBT crowd meets for drinks and the occasional dancing, when the back turns into a dance floor.

Rua da Conceição, 80
Slightly hidden, this is the place for drag performances. A mannequin is placed outside at the door, indicating that it's open and ready to have some fun. The drag shows happen on Fridays and Saturdays, at around 2:30am.

Rua Nossa Senhora de Fatima, 334
Classifying this as a gay-friendly straight bar or as a straight-friendly gay bar depends on who you ask. It's perhaps both, depending on the night. It's both a bar and an art gallery, so any given night may be straight, gay, mixed or whatever.
It's a couple of minutes walk from Casa da Música, so it's a nice destination after a concert there. Admire the current exhibition and the head for the garden or one of the bars. It opens at 10PM and often stays open until sunrise on weekends.

Rua do Bonjardim, 1121
This bar proudly shows the rainbow flag at the door, while inside, gay, lesbian, or curious dance the night away to house music. It's also known for its flamboyant drag shows.

Beco Passos Manuel, 40
This is the gay hotspot of the moment, especially crowded on Saturdays (it only opens on Fridays, Saturdays, and the eve of a holiday). It's located in a former warehouse, has a welcoming atmosphere, and the music is mostly house.