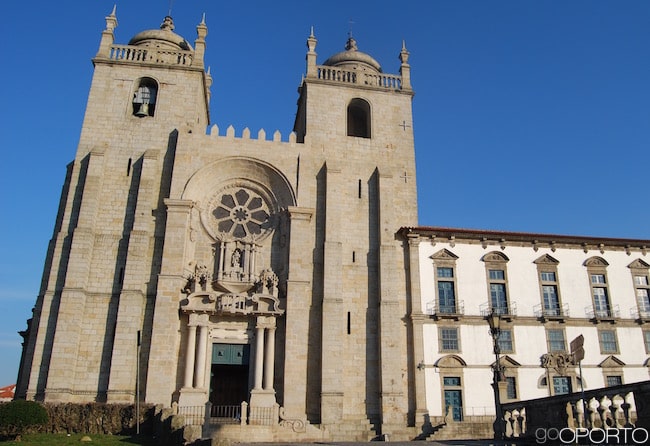 Porto's austere fortress-like cathedral is where Prince Henry the Navigator was baptised and where King John I married the English Princess Philippa of Lancaster in the 14th century. The building has its origins in the 1100s, although it underwent many alterations over time.

The Gothic rose window is the only part of the original façade that remains, especially after Baroque alterations in the 18th century. The loggia on the north front was added at that time, as was the extraordinary altarpiece inside, entirely made of silver.

The Gothic cloisters are more outstanding than the church itself, covered with magnificant blue and white tiles from the 1700s.
Also worth a visit is the dazzling chapterhouse and its collection of sacred art.

Before going inside, contemplate the fine views over the rooftops of old Porto from the terrace, and admire the grandiose three-storey façade of the Episcopal Palace, whose interior can also be visited.

Although the cathedral is Porto's largest religious monument, an even more impressive church in the city is São Francisco Church, which has a magnificent golden interior which should not be missed.