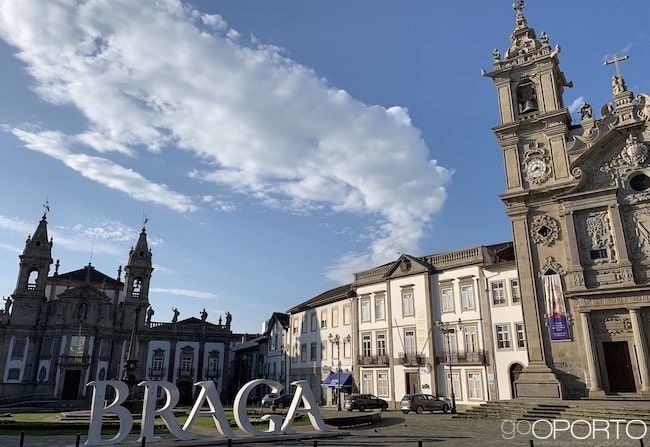 Porto is not only the largest city of northern Portugal, but also of northwestern Iberia. It's therefore the gateway to several attractive Portuguese and Spanish cities such as Braga, Guimarães, Vigo, or the famous pilgrimage site of Santiago de Compostela.

You can easily reach most of these cities by bus or train, making it possible to visit them on a day trip. Braga is especially worth a visit, for its marvelous baroque monuments (its Bom Jesus Sanctuary is one of Portugal's most famous sights), while the medieval World Heritage city of Guimarães is also recommended for its beautifully-preserved old center, its castle, and palace dating back to the foundation of Portugal in the 12th century (these two cities can be visited on an organized tour).

Nearby, pretty Viana do Castelo is one of Portugal's most authentic and traditional cities, and further south, Mateus Palace outside Vila Real is worth going out of your way to see.

But the most spectacular attraction outside Porto is all of the Douro Valley. You're sure to become mesmerized by the beauty of this World Heritage Site, which is best appreciated on a river cruise (most cruises depart from Cais de Gaia).

Portugal is one of the most beautiful countries in the world, so if you have time, also head down south for a few days and explore the capital city and the magnificent beaches on the southern coast.

It's a good idea to rent a car to visit Porto's surroundings, but there's also good public transportation connecting the city to the other major attractions and towns nearby.
Whether you choose to use an express bus or the train, depends on the departure times.
For bus schedules see www.rede-expressos.pt, and for the train departure times from Porto, see www.cp.pt.
Here are the estimated journey times to the main towns outside Porto:

From Porto to Guimarães:
Express Bus: 1h
Train: 1h10min
On a tour »

From Porto to Viana do Castelo:
Express Bus: Between 1h and 1h30min
Train: Between 1h20min and 2h
On a tour »

From Porto to Vila real:
Express Bus: Between 1h10min and 1h30min